Emotions describe a range of feelings and sensations that we often cannot cognitively explain or process. Love, anger, frustration, happiness, and fear are good examples.

“Emotions are, in essence, impulses to act, the instant plans for handling life that evolution has instilled in us.”    - Daniel Goleman, psychologist

It is a fallacy to believe, as many cultures do, that humans would be better off without emotions, or that we can divorce ourself from emotions.

Many emotional sensations are directly correlated with neurotransmitters, and can be thought of as common to all mammals.

The physical sensations of emotions have been mapped by psychology researchers in Finland, and found some very interesting and consistent sensations.

Map of the Human "feeling space".

Emotions can be mild or intense; for example, distraction is a mild form of surprise, and rage is an intense form of anger.

Fisually, the kinds of relation between each pair of emotions are:

Book - Emotional Intelligence: Why it can Matter More Than IQ 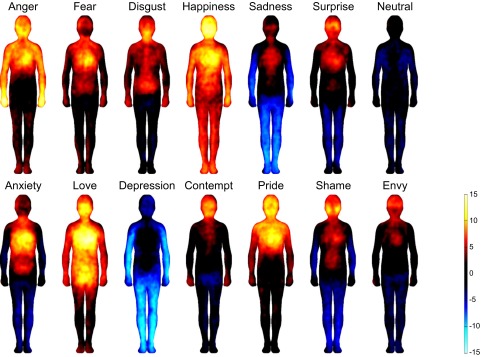 Article
-
Teaching Your Children About Emotions.
Sunday, December 2, 2018
Emotions are so valuable... once you know how to use them.

CM115
-
Mastering Basic Emotions
Stop burying your emotions. Understand and learn to make use of your emotions the way they were intended.